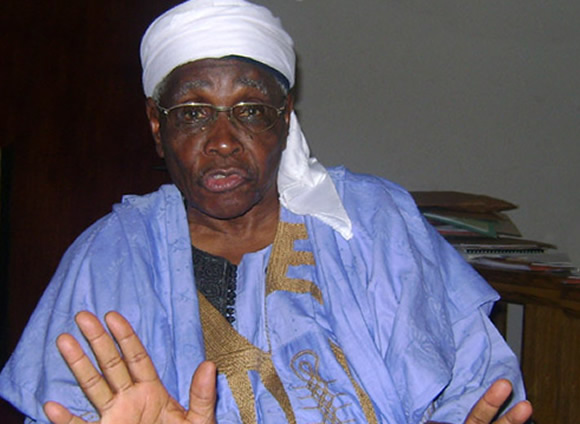 PROFESSOR Ango Abdullahi-led Northern Elders Forum on Sunday gave a hint of mobilising other groups to protest the worsening wave of insecurity in the North.
Read Also:
ASUU can't call off strike -NLC
The plan, according to the northern group, is aimed at drawing the attention of the President, Major General Muhammadu Buhari (retd.), and other authorities to the plight of the region. NEF said the region had been pushed to the wall over the ineptitude and an apparent failure of President Buhari to either revamp the economy or secure the lives and property of northerners.
Read Also:
French police dismantle Afghan refugees camp in Paris
Explaining that the President has failed woefully in all fronts, the group argued that under Buhari, citizens were at the mercy of armed gangs, who roamed the streets, towns and villages at will, to wreak havoc on defenceless people. According to the NEF, it appears Buhari and the governors have lost control of securing the people of the North in particular and the country in general. The NEF noted that it was no longer an exaggeration that the security situation in the country and in particular in the North had gone worse, while the President issued threats and promises that had “no effects.” The northern elders told the President point blank that they were tired of excuses, saying that it was time to say “enough is enough.” It, therefore, urged the citizens (northerners), who would participate in the peaceful protest to conduct themselves peacefully, while urging the government to respect their rights to protest. Convener of the NEF and former Vice Chancellor of the Ahmadu Bello University, Zaria, Prof. Ango Abdullahi, in a statement released on Sunday, said, “NEF is alarmed at the rising insecurity of communities and their properties in the North. “Recent escalation of attacks by bandits, rustlers and insurgents leave the only conclusion that the people of the North are now completely at the mercy of armed gangs who roam towns and villages at will, wreaking havoc. “Our people are known for their patience and respect for constituted authorities, but all governments must be aware by now that all northerners have been pushed to the wall. “The forum is aware that some citizens are contemplating peaceful protests, which are their constitutional rights, to draw attention of President Buhari and all levels of authority to the plight of people of the North. “The forum urges all citizens to conduct themselves in peaceful and responsible manner, and it urges governments to respect the rights of citizens to express their opinions peacefully. “The forum is also consulting other groups and organisations, which share its goals and concerns to lend our voices to the demands for action and relief from the unremitting assaults on our lives and livelihood as northerners.” Abdullahi added, “The Forum reminds President Muhammadu Buhari that provision of security and pursuit of economic welfare of citizens are the only two constitutional responsibilities of the state, which all leaders must achieve. “Our current circumstances in the North clearly demonstrate that President Buhari’s administration has woefully failed to achieve either. This is unacceptable. We demand an immediate and comprehensive improvement of our security in the North. “We are tired of excuses and verbal threats, which criminals laugh at, and our fellow citizens see as a clear failure of leadership. Enough is enough.” ‘NEF can’t boast of credible membership’ Reacting, the Presidency on Sunday in a statement by the Special Adviser to the President on Media and Publicity, Femi Adesina, described Abdullahi as a General without troops. The statement issued on Sunday read, “We are not surprised by this latest statement by Prof Abdullahi, and our past position on what his group represents remains unchanged: a mere irritant and featherweight. “The former vice chancellor signed the statement under the banner of Northern Elders Forum. Hearing that title, you would think the body was a conglomeration of true elders. But the truth is that NEF is just Ango Abdullahi, and Ango Abdullahi is NEF. It is a quasi-organisation that boasts of no credible membership, and its leader is akin to a General without troops. “NEF is merely waving a flag that is at half-mast. President Buhari steadily and steadfastly focuses on the task of retooling Nigeria, and discerning Nigerians know the true state of the nation. They don’t need a paper tiger to tell them anything.”
Drop your Comment »
Source: https://punchng.com/nef-plans-protests-over-worsening-insecurity/