US Election: You won't be safe under Biden- Pence 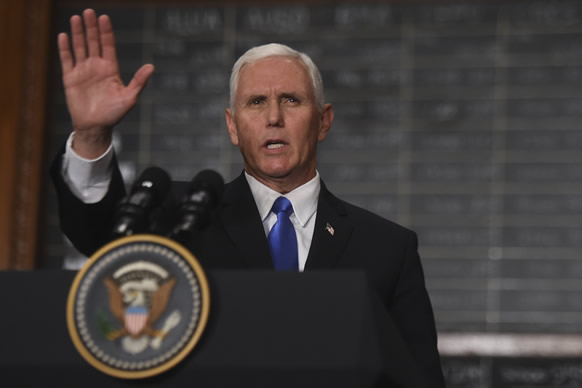 Donald Trump’s vice president Mike Pence took center stage at the Republican convention Wednesday to warn voters they “won’t be safe in Joe Biden’s America”, and cast the president as their protector against the “radical” left.
Read Also:
Ghana: AU, ECOWAS seek violence-free polls
Pence was the keynote speaker in a parade of Trump acolytes who sought to uplift the president as an economic virtuoso and champion of conservative and pro-life values, law enforcement and civil rights. They also spoke of dark forces intent on ending the American dream and said losing to their Democratic rivals is not an option.
Read Also:
COVID-19: UK to cut quarantine period for incoming passengers
“Law and order is on the ballot,” Pence stressed on the third night of a convention overshadowed by violent unrest in Wisconsin and the approach of Hurricane Laura to the southern US coast. He addressed the event from Fort McHenry in Baltimore, the site of an 1814 British bombardment that inspired the poem later turned into the US national anthem, “The Star-Spangled Banner.” With that backdrop, Pence made the patriotic case for Trump getting a second term instead of allowing the nation to be “fundamentally transformed” by a Biden administration he warned would take an uncharted path towards socialism and mob rule. “The hard truth is, you won’t be safe in Joe Biden’s America,” said the 61-year-old Pence. Pence’s address came amid a new flare-up of racial tensions in the United States, with protests spreading over the latest police shooting of an African-American man, Jacob Blake, who was shot in the back in Kenosha, Wisconsin. Trump has announced he is sending in additional federal forces to quell unrest in the Midwestern city, where two people were shot dead during anti-police protests Tuesday. A 17-year-old has been arrested on murder charges. Addressing the latest unrest, Pence struck a tough tone. “Let me be clear. The violence must stop whether in Minneapolis, Portland or Kenosha,” he said. “We will have law and order on the streets of this country for every American.” Touting Trump’s strong economic record before the Covid-19 pandemic struck and his ongoing efforts to revive it – Pence urged voters to ask themselves “who do you trust to rebuild this economy?” A former governor of Indiana, the evangelical Christian Pence has taken on the role of calm counterweight to Trump’s constant drama. As a traditional conservative, Pence seeks to reassure old-school Republicans while also praising the new generation of Trump loyalists – a balancing act that will likely play out within the party ahead of the presidential election in 2024. – Pandemic pointman – Pence is playing an important part in Trump’s reelection, crisscrossing the country — with an emphasis on swing states including Wisconsin — to rally support. He has similarly served as the White House’s sober pointman on the coronavirus pandemic, which has killed nearly 180,000 Americans since Trump’s initial, erroneous prediction that it would disappear without trouble. Where Trump has veered radically between dismissing the crisis and grimly embracing a self-declared role as a “wartime president,” Pence has shouldered the unglamorous role of White House coronavirus task force coordinator. He reached out to the millions of Americans upended by the crisis in a way Trump has appeared unable to do. “Tonight, our hearts are with all the families who have lost loved ones. We mourn with those who mourn, and we grieve with those who grieve,” Pence said. But in comments sure to draw criticism from opponents, Pence saluted Trump’s handling of the pandemic. “We are slowing the spread, we are protecting the vulnerable, we are saving lives, and we are opening up America again,” he said. Polls show almost two-thirds of Americans are unhappy with Trump’s pandemic response. Biden holds a lead nationally, but a CNBC-Change Research poll released Wednesday showed the race tightening across six swing states including Florida, Pennsylvania and Wisconsin. Pence’s opponent, Democratic vice presidential pick Kamala Harris, will be attacking Trump on his coronavirus record at a speech Thursday in Washington, the same day Trump gives his main acceptance speech at the White House to close out the Republican convention. Pence’s Baltimore address follows two days of appearances by Trump boosters, including First Lady Melania Trump, who on Tuesday defended the president as “an authentic person who loves this country.” Trump, never far from the spotlight, flew with Melania to Baltimore to celebrate with the Pences after the vice president’s speech but did not formally address the gathering.
Drop your Comment »
Source: https://punchng.com/you-wont-be-safe-under-biden-pence-warns-voters/

Read More Comments
You'll like:
Trending News on Us Election